How Packaging May Be Tricking Parents Into Buying More Sugary Drinks

Have you ever looked at a juicebox, seen a picture of a smiling apple and the words “made with real juice,” and assumed the drink was healthy enough to give your child? So have most parents, but a new report shows what you’re giving your child may barely have any juice in it at all — despite what the label says.

Pediatricians, dentists, and nutritionists have long warned parents against giving children drinks sweetened with sugar, saying they can cause tooth decay, contribute to unnecessary weight gain, and have very little nutritional value. In fact, new guidelines were recently released for what kids under five years old should drink, specifically naming several common beverages that have too much sugar for kids.

Released by the Rudd Center for Food Policy & Obesity at the University of Connecticut, this new report found that sugary fruit drinks marketed to children typically have only 5 percent juice (or less!), but a whopping 80 percent of them featured packaging with images of fruit.

Still, consumers are drinking them in droves. Fruit drinks made up 62 percent of drink sales last year, while plain ol’ water and juices made from 100 percent juice (the good stuff, according to experts) made up only 38 percent.

Packaging can be deceiving

Some experts think packaging is a big part of the problem. Many so-called juice drinks claim to be made with real fruit even when only a tiny percentage of the contents actually contain fruit. Others boast about the lack of high fructose corn syrup but disguise other forms of added sugar.

Even claims of being low sugar can be deceptive, as there’s no way to know exactly how much is in a drink unless you study the label, and in many cases, “less” or “low” sugar isn’t always that much better. Of the juice drinks studied in the report, 60 percent claimed to have “less” or “low” sugar or “no high fructose corn syrup” yet one-third of them had 4 teaspoons or more of sugar per serving, which is about half of the daily maximum recommended for children.

Sometimes a drink’s bright or bold color can be part of the deception. Manufacturers are known to use synthetic dye to make them more appealing in the grocery store, and kids are easy targets. As a result, the amount of synthetic dye children consume every day can be as shocking as the sugar.

The American Academy of Pediatrics recommends waiting until children are at least 1 before offering juice and to avoid serving it from a bottle so they’re less likely to get hung up on one brand or advertising. Look for labels that say 100 percent juice — anything else may be little more than 5 percent juice and the rest added sugars. It’s also important not to let them sip on juice drinks for long periods of time. Some kids hang on to their boxed or bottled drinks so long it keeps their teeth covered in sugary liquid, which promotes tooth decay. Diluting juice with water can help to offset a drinks’ sugar content. Finally experts are constantly reminding parents that the occasional juice is OK but water and milk should still be a child’s primary beverages.

The good news is that children don’t consume as much sugar as we think (though it still may be too much), and it’s never too late to start a healthy habit. If you’re worried about what your child is drinking, increase the amount of water that’s offered and take a closer look at the labels of any other drinks you buy. Even small steps in the right direction count. 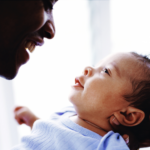 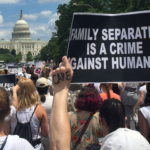 Toxic Stress: What Harvard Has To Say About Family Separation and Child Detention