Juneteenth is the annual celebration of the end of slavery in the United States. President Biden approved legislation to make Juneteenth a federal holiday last year, but Juneteenth has been celebrated, largely unofficially, all over the US since the 1860s.

Want to talk to your kids about this important holiday? Here are some ways to introduce Juneteenth to your kids or answer questions they may have.

“Juneteenth is when we celebrate the day in 1865 when Texas became the last state in the country to announce that enslaved people would be freed. It’s a special day to honor the liberation of Black people in America.”

The news of the Emancipation Proclamation, which was intended to free all enslaved people in the country, finally reached Texas over two years after it was issued. At that time in history there were no phones or television. Since important information had to be written down and sent with people on horseback, news traveled more slowly than it does today.

Why is it called ‘Juneteenth’?

“The name of the holiday is a mash-up of ‘June’ and ‘nineteenth,’ which was the date in 1865 when Union General Gordon Granger arrived in Galveston, Texas to share the news that the Civil War was over and slaves had won their freedom.”

There were still about 250,000 enslaved Black people in Texas at the time. Imagine what it must have been like when the news of their freedom started spreading through the town!

“Slavery is when someone claims they own another person, and forces them to work for no pay. The enslaved person is denied the rights and freedoms of other free people. Despite how obviously wrong and immoral that is, Black people were enslaved by white people in the United States and in other parts of the world for hundreds of years.”

Don’t forget to emphasize the enormous role that enslaved people played in building our country’s economy and infrastructure from the very beginning.

How do people celebrate Juneteenth?

“Celebrations of Juneteenth have evolved over time; in the early years, the holiday was used as a chance to educate newly-freed people about their rights. In more recent years, the date has been used as an opportunity to build solidarity among Black Americans who continue to fight for equal rights. And—the day is also a celebration. Many traditional Juneteenth celebrations include a barbecue, lots of food, and formal clothing—as well as time with family and elders.“

Obviously, this holiday means different things to different people, and Black families may celebrate differently than white families or non-Black people of color. For example, in recognition of the costs of racism that Black Americans still bear, non-Black families might choose to give reparations to the Black community each year as part of their Juneteenth tradition.

Keep in mind, the race and identity of your child is important to the conversation—it’s crucial to be mindful of how concepts like slavery and white supremacy still have an impact on us today, and especially how they can affect young kids who are first learning about racial differences.

Parents of white children might emphasize the role of white people in the history of slavery and explain how white supremacy still shows up in our society even today. Parents of Black children might focus on the more uplifting aspects of Juneteenth and Black history, perhaps by providing some inspiring Black role models or learning something new about your own family history together.

Check in with your child and ask how these big concepts like slavery and white supremacy are making them feel. What do they think about Juneteenth and how it came about? Rather than just explaining the basics, it can be really helpful to open up a dialogue about why such a holiday is so important to celebrate in the first place.

A version of this article originally appeared on this website on June 17, 2021. 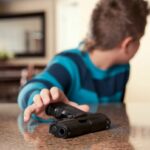 How to protect kids from guns, the leading cause of child death 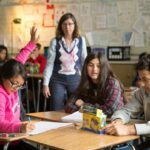 In many states, school districts have a larger-than-usual freshman class after more ninth graders were held back. Photo by Allison Shelley/The Verbatim Agency for EDUimages
Next Post