To the delight of many parents, scientists are proposing a ban on glitter. This sparkly substance might bring joy to children everywhere, but it’s wreaking havoc on our environment. Glitter is considered a microplastic and environmentalists are concerned about its effect on the planet.

The tiny particles in every jar of glitter are made of a plastic substance called Mylar. Mylar is the leading source of plastic pollution in our water, accounting for more than 92 percent of the over 5 trillion pieces of plastic floating in the ocean. Glitter poses a particular problem because of its size, which makes the particles easy to wash down drains. It’s so small that it’s also easily ingested by sea animals, causing changes to their behavior and damage to their livers—and eventually making its way back to us in tap water and the food we eat.

Every parent knows how hard it is to get glitter out of their home; imagine having to do the same to the world’s rivers and oceans and you’ll understand why these tiny pieces of plastic can remain in our water and food supply for the thousands of years it takes them to break down.

A similar form of microplastic, called microbeads, has already been banned in cosmetic and personal care products in the United States and the United Kingdom. Now scientists feel it’s time to take it one step further and ban all glitter that is not biodegradable, since it is considered a single-use plastic — something we use once and then get rid of.

Kids, makeup artists and crafters alike tend to send the tiny particles down the drain rather than to the closest recycling center. In this day and age of finding sustainable and/or reusable versions of almost everything, experts feel it’s time to stop the use of something that has no easy way to be recycled.

Trisia Farrelly, Ph.D., an environmental anthropologist at Massey University in New Zealand, has been inundated with questions about the environmental hazards of glitter ever since she commented in support of a local daycare’s ban on glitter in 2017. Dr. Farrelly feels strongly about manufacturers’ responsibilities to protect the environment. “Why should manufacturers be allowed to release products into the market without first proving they are safe? At the very least, they should ensure their plastic products are recyclable.”

If your children are still itching to make things sparkle and you really love to vacuum, there are a lot of biodegradable glitter options out there. You can raise the next generation of eco-conscious glitter-slime-makers with products like those from Wild Glitter and Minke.

While a ban on glitter may seem drastic to our little makers and fashionistas, we owe it to their future to take the time to find safer alternatives. Dr. Farrelly agrees: “It’s estimated that by 2050, 20 percent of the global share of oil consumption will be dedicated to the production of plastic, by which time it is likely we will be seeing more plastic than fish by weight in the world’s oceans.” 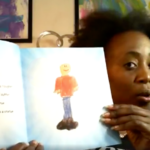 Concerned That Students Weren’t Getting Bedtime Stories, Teacher Started Reading On Facebook—Now, To a National Audience