Federal education officials are investigating whether attempts in five states to block schools from mandating masks constitutes a civil rights violation for students with disabilities.

The U.S. Department of Education’s civil rights office launched investigations in Iowa, Oklahoma, South Carolina, Tennessee, and Utah on Monday, saying policies in those states may have prevented schools from taking steps to protect students whose medical conditions related to their disabilities put them at greater risk of getting severely ill from COVID.

The move marks the latest escalation in tensions between federal and state officials over who can set the terms for safety precautions in schools.

“The Department will fight to protect every student’s right to access in-person learning safely and the rights of local educators to put in place policies that allow all students to return to the classroom full-time in-person safely this fall,” Education Secretary Miguel Cardona said in a statement.

Cardona had warned officials in all five of those states earlier this month that their attempts to block school mask mandates could be seen as preventing school districts from fully reopening for in-person learning — a duty they have under the law that provides COVID relief to schools. Separately, Cardona said that he was prepared to use civil rights investigations to push states to act — though it remains unclear how quickly these investigations could prompt any changes.

Education department officials said the investigations would be conducted “over the coming weeks.”

Officials said they hadn’t opened investigations in Florida, Texas, Arkansas, or Arizona because court orders or other state orders are preventing bans on mask mandates from being enforced there for now — allowing schools to require masks if they choose.

But the education department said it would continue to monitor those states and would take similar action if court decisions are overturned, or if state officials there try to prevent school districts from putting mask mandates in place.

Mask requirements have become a focus of a contentious start to the school year in places like Tennessee, where Gov. Bill Lee issued an executive order on Aug. 16 allowing parents to opt their children out of local mask mandates. “Parents are THE authority & will be the ultimate decision-makers for their individual child’s health & well-being,” he tweeted.

Lee has since been hit with two lawsuits challenging his order, one from the Shelby County government, which has a mask mandate, and the other from families who charge the order violates the Americans with Disabilities Act. And at least a dozen school districts have ignored Lee’s order as pediatric COVID cases continue to surge.

Teachers association officials in the state’s two largest districts and some parents are pushing back. Michele Sheriff, head of Metro Nashville Education Association, said schools in Tennessee’s second largest district already have seen thousands of students forced to quarantine or isolate due to COVID.

“The problem will only get worse as the year goes on unless our local elected school boards have the freedom and autonomy to make decisions that are best for their school communities,” she said at a press conference Monday morning.

Polls show that a majority of U.S. parents and the general public support mask requirements in schools.

There is limited research about the effects of masking in schools, but research in other settings suggests that masks can reduce the transmission of COVID-19 indoors. 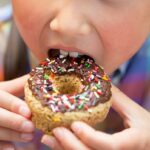