Every parent knows that flooding our kids’ bodies with sugar is not a good idea. Eating and drinking too much added sugar puts kids at risk for obesity, tooth decay, heart disease, high cholesterol, high blood pressure, type 2 diabetes and fatty liver disease, among other health problems, according to the American Academy of Pediatrics (AAP).

But more and more research is emerging showing sugar can actually cause changes in the brain, too—changes similar to those caused by drugs.

A new study on animals found that sugar prompts the brain to release the same reward system in the brain as drugs. Here’s how it works: Whenever a person has a positive experience, whether it’s a pleasant exchange with a friend, a happy coincidence, or anything else that’s meaningful to them, the brain uses dopamine, a neurotransmitter, to send out a “reward” to the brain (ie good feelings).

Sugar, it turns out, can have that same effect—as do drugs. The brain’s reward system behaves the same whether the stimulus is natural or artificial.

It’s a habit, not an addiction

The good news is that even though sugar causes temporary changes in brain chemistry, the changes don’t stick around in humans like the changes associated with addiction do. In other words, the problem isn’t that your kids are addicted to sugar, it’s that they have a habit of consuming it because when they do, their brain rewards them for it.

It’s important to note that sugar intake and addiction haven’t been studied in humans for all sorts of reasons, including the fact that our dopamine levels are affected by many stimuli that could throw off any research. Generally speaking, addiction is characterized by brain changes that require you to need more of a substance to get the same high over time, followed by withdrawal symptoms if you don’t. Those changes have been observed in some animal studies, but not people.

That said, while sugar can temporarily energize you, in the end, it only promotes more feelings of hunger. Science has also debunked the existence of a “sugar high,” so parents don’t need to worry about their kids bouncing off the walls because they had one too many lollipops, but they might be begging you for a snack soon.

But the news isn’t all good

Even though there is no real risk of addiction and sugar highs are more myth than fact, it’s still important to limit kids’ sugar intake. Research done this year by the University of Georgia showed that eating too much sugar in childhood can have other negative effects on the brain. Namely, it impairs learning and memory—even into adulthood. Scientists believe this could be related to a specific bacteria in the gut that grows in response to a sugary diet in adolescence (which is all too common), but regardless of the reason, no parent wants their kids to struggle with memory loss if it can be avoided.

Luckily, sugar is now easier to spot on food labels. The American Academy of Pediatrics suggests kids ages 2 to 18 should consume no more than 6 teaspoons of added sugar per day. Children in this age group tend to consume more than three times that amount on average, so it’s important to keep an eye on all those sweet snacks and drinks—it all adds up. 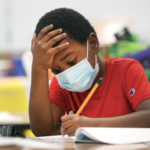