Segregation, white supremacy and racism seem like really big topics to try to discuss with kids. That’s why specific stories and images are so important, so kids can find a way to relate the concepts to their own lives.

Why not start with a picture from history that’s focused on one little girl doing something completely relatable—walking out of school at the end of the day? Keep scrolling for the powerful photo of Ruby Bridges, and a script to help you discuss this piece of history with kids.

This is a photo of 6-year-old Ruby Bridges being escorted out of William Frantz Elementary School by U.S. marshals, after schools in the South were ordered to desegregate.

Now, see how you can begin to explain to kids what’s happening in the picture and how it ties to white supremacy.

Here’s what you can say:

“The little girl in the picture is Ruby Bridges, who was 6 years old when she was the first Black student to attend an all-white school in New Orleans in 1960. She had to be escorted to and from school by U.S. marshals because a lot of people were angry about the school becoming integrated (racially mixed).”

“On her first day, and for months afterward, there was a crowd of white people outside the school chanting things like, ‘Two, four, six, eight, we don’t want to integrate,’ and holding signs saying they didn’t want Black students at their school.”

“Segregation didn’t just happen in schools, though. In our country, there used to be White-Only and Black-Only sections of places like parks, theaters, buses, waiting rooms, and even cemeteries. Black people couldn’t use the same public drinking fountains or phone booths as white people.”

“The white segregationists (people who wanted to enforce the separation of different racial groups) were so afraid of change that they didn’t even see Ruby’s and other Black families as regular people who just wanted a good education.”

“Those segregationists seemed to believe that white people are better than people of other races and cultures, and that white people should have control over everyone else. The way that belief gets turned into widespread actions or policies—like segregating schools—is what we call white supremacy.”

Here’s an activity to get kids to dig deeper:

Read some of these signs that white segregationists (some of them children) were holding up outside of Ruby Bridges’ new school:

If you lived near this school in 1960 and saw a neighbor hold up one of these signs, what would you say or do? Make a list of possible responses and actions.

Here’s how you can start to explain the role white supremacy still plays in our society:

“For example, a bank process called redlining used to make it so Black people couldn’t get loans for homes in certain neighborhoods. Even though that’s illegal now, their financial growth and ability to move to higher-income areas was denied for so long that communities of color still feel the negative effects of that discrimination today.”

“But discrimination is still happening now, too. In fact, the violent 1.6.21 attack on democracy at the US Capitol was carried out by white nationalists and racist groups. But they’re just one of the more visible representations of white supremacy in our society today. Sometimes it’s more subtle.”

“Black people face issues like having less access to quality education, getting unfairly passed over for high-paying jobs, being more likely to get stopped and frisked by police, and not getting equal medical treatment—just because of the color of their skin. It also means that Black people are less likely to be represented in places like movies or textbooks.”

“The fact that this is still happening means we have to ALL learn more about it and work together to stand up against racism, discrimination, and white supremacy wherever we find it.”

Reflection Qs to ask your child: 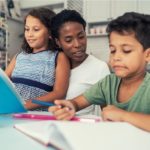 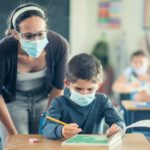 Two for one: How Biden’s plan to cut child poverty could boost student learning