If your holiday travel plans include flights and you want to make sure you sit next to your kids, you may have to pay extra fees or risk being forced to have them sit next to strangers.

With an increasing number of airlines charging fees for seat selection, it’s getting harder for families to stay together, even when flight attendants are willing to plead with other passengers to move to other seats on your behalf. It’s a practice that frankly is uncomfortable for everyone, even those who are seated around you. Parents don’t like asking strangers to make special accommodations for them, and with such tight quarters on airplanes, it’s difficult to say no in front of fellow passengers if you’re asked.

In an effort to remedy this problem, a few years ago Congress asked the Department of Transportation (DOT) to investigate whether it was necessary to establish a policy that ensures children 13 or younger can sit next to family members. The DOT determined there weren’t enough complaints filed to warrant further action.

But not everyone agrees, at least not the hundreds of families who’ve filed complaints to Consumer Reports, prompting the organization to ask the Committee on Transportation and Infrastructure and the Committee on Aviation to look into the matter. In some of the complaints filed, children as young as 1 had been separated from their families, at times on multiple legs of international flights.

Not only does splitting up families cause distress for those involved, some experts think it also poses a safety risk. Just imagine what would happen in an emergency situation if parents couldn’t get to their children and vice versa. The Federal Bureau of Investigation has also reported that children as young as 8 have been victims of sexual assault on airplanes, causing even greater concern among parents.

Before you fly, contact your airline and ask if they have a policy about keeping families together and if there are any early requests you can make to sit together. Just be prepared to be told that the only way to ensure pack seating is to actually purchase seats together, a cost that can add up if you have multiple family members.

As William J. McGee, the aviation adviser for Consumer Reports told USA Today, “It’s not enough for DOT to merely echo airline industry platitudes about caring for families. It’s past time for the airlines — and our government — to demonstrate such concern.”

If you want to file a complaint yourself, share your experience at Consumer Reports. 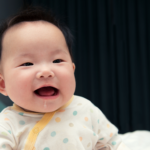 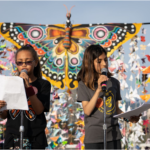 Co-Founders of the youth movement The Butterfly Effect, Kaia Marbin and Lily Ellis, speak at a rally in Oakland, CA. Photo credit: Shira Belazel, used with permission
Next Post