It’s an ugly part of our history, but legalized segregation and discrimination in the form of Jim Crow laws went on for a shocking 100 years, and need to be part of kids’ understanding of our country!

When many generations of Americans grew up seeing segregation and unequal treatment based on race as normal, of course it’s going to take a long time to beat racism as a nation. We can’t just gloss over this disturbing history—we need to learn more about it, to prevent these mistakes from happening again.

Even if you didn’t learn enough about it during your own schooling, this generation of kids can be more informed! Here’s a script for beginning to discuss Jim Crow laws with kids—preview it and you’ll realize how important of a conversation it truly is.

How did Jim Crow laws start?

“Slavery officially ended in 1865, and Black Americans were supposed to be free. But a lot of white folks who were used to being in power got scared that Black people would gain too much power now that they could do things like get the education and jobs they wanted, run successful businesses, or vote and become political leaders.

So white leaders came up with laws in various states, counties, and cities throughout the country that tried to keep Black folks from having the same opportunities as white folks.

These laws are known as ‘Jim Crow’ laws. Jim Crow was a character from an old performance that made fun of Black people, creating a racist image of Black people that many white people bought into. So the name Jim Crow became a symbol of white leaders keeping Black people from getting full rights and freedom in America.”

What kinds of laws were included?

“Under the Jim Crow laws, many places had signs and rules saying that Black people weren’t allowed to share spaces with white people. Schools, restaurants, certain neighborhoods, hotels, libraries, sections of buses and trains, and even public bathrooms and drinking fountains were often designated for white people only.

To make these types of laws legal, segregation was supposed to be ‘separate but equal.’ But one major problem was that things were not actually equal. Schools for white children were given more money for books and supplies than schools for Black children, for example.”

Was anyone else impacted?

“Of course Black and white people weren’t the only ones in America during that time, so the Jim Crow laws affected other minorities too.

Asian, Latinx, Native American, and multiracial Americans were sometimes lumped in with Black groups or white groups, sometimes left out altogether, or sometimes told to make their own impossible decisions about where they should belong. Sometimes this created conflict between different minority groups.

But no matter which privileges or rights certain minority groups got or didn’t get, white was still considered both ‘normal’ and superior.”

Why did it keep going if it was so unfair?

“Some of the Jim Crow laws were designed to keep Black citizens from voting in elections. Instead of directly saying that Black people couldn’t vote (since that wouldn’t have been allowed), the rules said things like you had to pay to vote, or you had to pass a difficult literacy test about American government to register to vote, or you couldn’t vote ever again if you’d been sent to prison for a felony. Often people whose parents and grandparents were voters (so, white folks) didn’t have to follow these strict new rules.

“To make it even more impossible, in many areas the police and local officials treated Black citizens very unfairly, making sure they were sent to prison much more frequently than white citizens, making sure they got asked the hardest questions on the voting literacy tests, and making sure they lived in neighborhoods farther away from the polling places.

Sometimes police would hold all Black drivers in jail on election day until the polls were closed, or angry white citizens would even threaten to kill Black people who tried to vote.

Of course, not being able to vote meant Black people and their voices couldn’t be heard. Their needs were less likely to be reflected in the officials that were elected and the laws that were passed, making it even harder to break the cycle of discrimination.”

“Jim Crow laws went on for about 100 years, can you imagine? That means a grandparent, parent, and child could all experience similar rules of segregation and discrimination for most of their lives—and it was allowed by the government!

Eventually, after lots and lots of mass protesting by people all over the country, Jim Crow laws became illegal everywhere in America. School segregation officially ended in 1954, other types of segregation were banned in 1964, and discriminatory voting rules were reversed in 1965.

But those laws being around for so long had a lot of long-term effects, even after they were over. That’s why there are still problems with racism, inequity, and segregation today.

For example, some white parents are still afraid to send their children to a school with mostly Black and brown students. And many schools with mostly white students still get more money for books and supplies than nearby schools that have mostly students of color.” 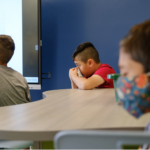 A student plays with his mask in a STEM class during the first day of school at Virginia Court Elementary School in Aurora, Colorado in August 2021. Polls show strong support for mask rules in schools. Eli Imadali for Chalkbeat
Prev Post 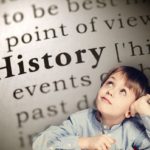 “How come there’s no White History Month?” An explainer for kids