A month into school, she says she underestimated the challenge ahead. Student behavior referrals are up, as middle schoolers hurt each others’ feelings with comments they’d usually only be bold enough to say online. She and other social workers have seen more verbal and physical fights, and worried parents are calling with concerns about their child’s shorter-than-usual temper.

“It’s definitely a lot more than I think any of us were mentally prepared for, even though we tried to prepare for it,” Rodriguez said.

Schools across the country say they’re seeing an uptick in disruptive behaviors. Some are obvious and visible, like students trashing bathrooms, fighting over social media posts, or running out of classrooms. Others are quieter calls for help, like students putting their head down and refusing to talk.

“This is a prolonged adjustment period,” said Dr. Tali Raviv, the associate director of the Center for Childhood Resilience at Lurie Children’s Hospital in Chicago. As children return to school, “There’s much more interaction, there’s much less downtime to recharge, there’s much less flexibility.”

The behavior issues are a reflection of the stress the pandemic placed on children, experts say, upending their education, schedules, and social lives. For students dealing with grief, mental health issues, or the layered effects of poverty and racism, big transitions can be even more challenging.

Anxiety and chronic stress also trigger a child’s “survival brain,” as Raviv put it. While some students retreat, others feel like they’re on high alert — turning a nudge in the hallway into cause for an outburst, for example. “You can get these really big reactions over really small things,” she said.

Coupled with staff exhaustion, the behavior challenges are making school environments more tense than educators and students had anticipated — and underscoring how much support students need right now.

Alex Magaña saw behavioral challenges crop up last year at the two Denver middle schools he oversees as executive principal, Grant Beacon and Kepner Beacon, when students were largely confined to one classroom. Students would occasionally rip off their masks and storm away, leaving staff members to chase them around the building, trying to prevent more disruption.

When classes resumed last month, the acting out intensified, Magaña said. There was a fight on the first day of school instigated by a social media slight, plus more defiance and challenging of authority.

“It’s hard when there are bumps,” said Kelsy Schmidt, the schools’ dean of instruction. “We want everything to be nice and smooth, and have high academic growth for students. But there are bumps now.”

Across the district, fights are up 21% this fall from the pre-pandemic fall of 2019, according to statistics shared publicly by Denver Public Schools officials. Mike Eaton, the chief of safety for the 90,000-student district, said he doesn’t know for sure what is driving the increase but suspects staff shortages are playing a role.

“Everybody is off in their own little la la land. It’s like we just go there, get to class, get out of the class, go home,” said Johnson, who’s also a member of Houston’s student-led congress. During group projects in class, teachers have to urge students to talk with one another. “It’s like we’ve forgotten how to socialize since we’ve been out of school for so long.”

Among teachers of younger students, it’s not uncommon to hear that students seem two grade levels behind socially. Educators have noticed that elementary schoolers who spent much of the last two years learning online are — to no one’s surprise — struggling to share and walk slowly in the hallway.

One challenge is that teachers often can’t point back to established rules and expectations, because those looked very different last year.

In Los Angeles, Cabrillo Avenue Elementary principal Nathan Mac Ainsh is hearing from parents asking why their children are getting hit on the playground. The reality is they’re just playing “a little too rough,” and not used to the rules on the playground after last year’s recess consisted of socially distanced walks.

Some students have responded differently. In Chicago, Rodriguez has watched students who are fearful of the virus refuse to get out of the car or hover at the entrance of school, afraid to go inside.

Other schools that expected to see more emotional outbursts and disruptive behavior haven’t seen them. In some places, staff have noticed behavior improvement, as students regain the structure and schedules they didn’t have last school year — though they acknowledge it may be a “honeymoon phase.”

“Kids are excited to be in this social environment. They missed each other,” said Shirley Brown, the high school principal at Detroit Edison Public School Academy. She’s noticed behavior is better than usual, perhaps because students don’t want to risk being suspended. “The students really want to be in the building, and they’re not quick to jeopardize that.”

Complicating how schools are responding to disruptive behavior is the fact that many educators are on edge, too. Staff shortages and quarantines have stretched teachers thin, leaving many with less of the patience needed to de-escalate student conflicts. Some say they’re already as tired as they’d typically be by Thanksgiving.

“Normally we are really energized and rocking and rolling at the end of September,” said Roxanne James, the principal of Jerome Mack Middle School in Las Vegas. This year, staffers are already exhausted. “They’re being asked to be those emotional supports for kids, for their families, for each other,” she said. “And they themselves have gone through the trauma of the pandemic.”

“One of the things different about COVID is that it’s not something just happening to one student and one family, and the teacher is on the outside. Teachers are right in there,” she said. “What we see a lot of is teachers feeling overwhelmed and burned out, and that does make a difference in how available they can be for their students.”

Sixteen-year-old Johnson has seen that dynamic at her Houston high school.

“You can tell some teachers really, really do love their job, but I feel like some teachers over the course of the pandemic, they really got a short temper,” she said.

She’s seen educators yell at students for talking and assign punishments usually used for younger students, like silent lunch. Johnson wants to see her school hire more counselors so they can spend more time talking with students and less time building schedules. Her counselor, she said, is always busy.

Teachers and students look for solutions

Schools are making changes meant to help, often with the help of COVID relief funding. Missoula County schools in Montana, for example, hired a dozen additional staffers to focus on student behavior and mental health. Now they have staff at every elementary and middle school to teach coping strategies to kids who are getting frustrated quickly.

Brown’s school in Detroit adjusted schedules this year so every morning begins with 15 minutes students can spend on deep breathing, discussing something in the news, or venting about personal stress.

“The needs are different than in a typical year because there’s such a high level of grief,” Brown said. “If they don’t have the opportunity to talk it out, they’ll act it out.”

Schools within the Indianapolis-based Phalen Leadership Academies charter network expanded their art and theater programs, and brought in adults — “semi-therapists,” as the network’s CEO Earl Martin Phalen dubbed them — to help kids make connections and sort through their emotions. The organization also boosted staffing by 10% across its 25 schools, with a focus on coaches and teachers who spend time daily with students to build “sticky relationships,” Phalen said.

Students are working to improve school environments, too. When school was remote, 15-year-old Carlos Alvarado, like many teens, realized that LGBTQIA+ students were experiencing less bullying away from school. When Alvarado, who uses he and they pronouns, returned this year to Houston’s Furr High School wearing a skirt, they were called names and filmed by older students.

He’s now planning a week of activities to make his school more welcoming, including a day where students will be asked to wear pins with their pronouns.

“I know people’s judgments and other people’s opinions. I was like: ‘Why not make an activity where people can learn?’” they said. “I feel these activities that we’re creating helps.”

At the two Denver middle schools, leaders are trying to take an empathetic approach. They have incorporated more downtime into daily schedules and loosened some rules, too — if students want to wear their hoodies up, they can.

One day earlier this month, Schmidt was making coffee when she saw another staff member consoling a former student sobbing in the hallway. She took the eighth grade boy under her arm, walked with him outside, and listened.

“Don’t we all sometimes just need a safe person to walk with?” Schmidt said. “A lot of our kids need that right now.” 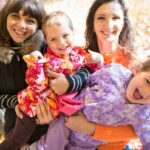 5 Tips for Building Your Parenting “Village” as a Single Parent