Coronavirus Update: How likely are schools to close, and why?

Updated March 12, 2020. If there’s any good news to be shared about the coronavirus epidemic, it’s that children seem to be spared. Unlike other viruses that are potentially dangerous for the very young and very old alike, there have been few COVID-19 cases involving children.

That said, containment is still of utmost importance to health officials because no one wants this virus to spread to anyone, whatever their age. The Trump administration and officials from the U.S. Centers for Disease Control and Prevention (CDC) have put schools on alert, asking that they take steps to prepare for the spread of the coronavirus. Historically, school closures have proven very effective at disrupting the spread of epidemics like this one (yes, it’s happened before).

Who decides there will be a closure?

Exactly what the CDC’s alert means is open to interpretation, as there are no hard and fast rules when it comes to deciding when and where schools will close, or how to address a pandemic like this in general. For the most part, this is one decision that’s largely left to the school districts themselves—and in most cases closures come with little or no warning, so parents don’t always have lots of time to prepare a Plan B.

Rebecca Gallagher, a mom in Seattle whose son’s school has already undergone multiple closings, told ParentsTogether, “We were given a day’s notice the first time and then just hours notice the second time.” However, she doesn’t blame the school district for the lack of warning, saying their district passed the information along as soon as a decision was made by the county health department. Parents there have been told that the county health department, CDC, and school districts are working together to determine which schools will close, with the governor to step in, in the event any statewide decisions need to be made.

That’s what happened in Ohio on Thursday, when Governor Mike DeWine announced that all public, private, and charter schools throughout the state would be closed for three weeks. Parents were initially told that Monday, March 16 would be a “practice” day to see how online learning would work for their students and teachers, but the updated lengthier closure is so far being referred to as “an extended spring break.” It’s unclear if they will transition to remote learning, but regarding major standardized testing DeWine told local news, “If we can’t have testing this year, we will not have testing this year. The world will not come to an end.”

In part of Seattle, an entire school district closed when several patients at a senior center contracted the virus. Once the news broke that there was a flood of cases in their region, students in Montgomery County, Washington, a suburb of Seattle, petitioned officials to close their schools. Administrators chose to cancel unnecessary field trips and take other precautions but otherwise chose to stay open. It’s yet another example of the head-shaking confusion that parents are forced to deal with right now as the country grapples with this unforeseen force that’s now pounding on our door.

It’s safe to say that more closings are inevitable, however, as each day brings news of more schools making the difficult decision to shut down. The Windy City went ahead and closed at least four schools due to an uptick in coronavirus cases this week. In states like Pennsylvania, some schools are closed for what they’re calling a “deep cleaning, or because someone in the community has tested positive for the virus. Several U.S. colleges and universities, such as Harvard University in Cambridge, Massachusetts, have canceled classes and transitioned to online education for the rest of the semester, at least. Many students will be allowed to stay in their dorms in order to minimize travel but some schools, like Harvard, have asked students not to return to campus after spring break.

How long will schools be closed?

There’s quite a range of closure lengths, from extra-long weekends spent disinfecting or training teachers on remote learning techniques, to lengthier closures with no exact end date in sight.

One thing that’s for sure: Even once the decision to close has been made, many parents aren’t convinced they’ll reopen as planned. Regarding her daughter’s school closing in Scarsdale, New York, Deborah Skolnik told us, “It has an end date of March 18, supposedly. Online instruction is scheduled to begin on the 16th. So will school REALLY reopen on the 18th? There is much speculation.”

What reasons are given for school closures?

In short, there is no easy answer. The decision to close a school or an entire school district depends on many factors, such as the number of people who are sick or hospitalized in the community, the potential impact on vulnerable students and employees, and whether a student or employee has tested positive or perhaps even just come into contact with someone who tested positive.

In New Jersey, several schools are closing because someone in the community contacted the virus, or in some cases because school officials need time to prepare a long-term plan. One New Jersey mom, Kim Bongiorno, confirmed that’s the case in her area. “Our school is using an unused snow day for the staff/faculty to brainstorm logistics of at-home learning just in case,” she told ParentsTogether. “We have families here who don’t have access to home computers and internet and adults who can help them with this. They’re trying to figure it all out. I applaud this proactive mindset.”

The vast differences between when, why, and if schools close is enough to make any parent’s head spin, but it’s important to understand why the decision is so difficult. There’s a domino effect that occurs when a school is forced to suddenly close its doors.

For one thing, many parents have to work and can’t stay home with their kids. This inevitably begs the question, where will these kids go? In most cases, administrators are looking into virtual learning opportunities as a way to minimize the impact on the school calendar and keep children from falling behind. But history shows that kids end up congregating anyway, whether at shopping malls, in each other’s homes, or somewhere else, increasing the odds of spreading and contracting the virus (the very thing officials are trying to avoid in the first place).

Jeff Duchin, health officer for the Seattle and King County Public Health Agency, told the New York Times that when the H1N1 epidemic took hold a decade ago, Seattle experienced “tremendous community disruption.” Students found ways to gather anyway, many parents were forced to stay home with their kids, and in some cases, the parents who stayed home were healthcare workers, which meant fewer people were available to take care of the sick. It’s important to note that many children also rely on schools for at least some of their meals, so if they don’t go, they can go hungry. Yet more reasons why school closures are considered a last resort by many education officials. 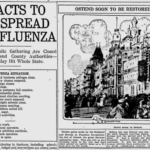 All of Spokane, WA was virtually shut down after the Spanish influenza arrived with a vengeance, the Spokane Daily Chronicle reported on Oct. 9, 1918. All schools, theaters, churches, and social clubs were closed. The mining stock exchange and YMCA were shut down. Spokesman-Review archives
Prev Post

From Spanish Flu To H1N1: Why Schools Close During Epidemics Like The Coronavirus 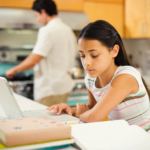 300 million and counting: How parents are dealing with school closures worldwide