Fewer Kids Have Health Insurance For the Second Year In a Row, Putting Them at Risk Now and in the Future

The number of children with health insurance in the U.S. declined again in 2018. This leaves almost half a million more kids uninsured than in the previous year, according to Census Bureau data. Most of the decline can be attributed to a drop in enrollment in public programs like Medicaid and the Children’s Health Insurance Program (CHIP). (CHIP is a program that fills the gap for those families whose incomes are too high to qualify for Medicaid but not high enough to afford to buy health insurance for their children.)

Under-resourced families are experiencing the loss of healthcare at higher rates.

The drop is especially affecting certain demographics, such as children in southern states, Hispanic children, and children in states that did not expand Medicaid eligibility. Many believe the decline is linked to the Trump administration’s rollback on Medicaid outreach efforts, increase in bureaucratic barriers to enrollment for families who may be eligible for Medicaid and CHIP, and growing fears that undocumented immigrant families have of engaging with government programs. And because the administration also rolled back subsidies for the health insurance market, reports the New York Times, many families who were previously buying their own health insurance through the Obamacare marketplace are no longer doing so.

The negative impact of not having health insurance spreads beyond the children themselves—and into the future.

For these families whose children are now uninsured, there’s a lack of safety net when it comes to kids’ health. This is yet another source of stress for parents. “When children are uninsured, they are at much higher risk of poorer health, lack of healthcare access, more trips to the emergency room and hospitalizations, and sadly, premature death,” Dr. Glenn Flores, a researcher at UConn School of Medicine, summarized to MedicalXpress.

And the effects go beyond the immediate health concerns. Joan Alker, executive director of the Georgetown University Center for Children and Families, told NPR in a recent interview, “We know from a lot of research that children who have Medicaid as opposed to those who are uninsured are more likely to succeed in school and more likely to graduate from college. They also have better health as adults and higher earnings, which means they’re less likely to rely on government assistance as adults.”

For any parents out there who are currently navigating the complicated world of health insurance decision-making for their families, Consumer Reports has some resources that might help 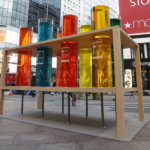 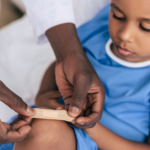 Pediatricians Asked to Fight Impact of Racism on Child Health