Kids are at low risk for monkeypox, but schools can take precautions, CDC says

Children and teens are at low risk for contracting monkeypox, but schools can still take steps to prepare for possible exposures or cases, officials from the Centers for Disease Control and Prevention said Friday.

So far, a handful of the 14,000 confirmed cases of monkeypox in the U.S. have been among kids under 18, a CDC official said. In other countries, monkeypox has been much less common among children than adults, too.

In a new fact sheet, the CDC says the risk of getting monkeypox at school or in an early childhood setting is low. There’s been only one known case to date — an Illinois day care worker who tested positive for monkeypox earlier this month. All of the potentially exposed children and adults got screened, and none had tested positive as of August 10, the local health department said.

Many of the precautions the CDC suggests schools take will sound familiar after two and a half years of following COVID protocols. That includes routinely cleaning and disinfecting classrooms, asking students and staff to regularly wash their hands, and providing personal protective equipment to staff who care for sick students.

Here’s what else the CDC says K-12 schools, early education providers, and after-school programs can do:

Understand the symptoms of monkeypox and how it spreads

Adults and children can contract monkeypox if they have close, personal contact with an infected person. So far, most monkeypox cases have been associated with sexual contact, though it’s possible to spread the virus by touching contaminated objects or fabrics — such as toys, books, and blankets — or a surface the infected person has used.

The main monkeypox symptom to watch for is a rash that can appear on the genitals, as well as the hands, feet, chest, face, or mouth. The rash may look like pimples or blisters at first and then scab over. Other signs include fever, chills, muscle aches, and other flu-like symptoms.

But the CDC cautions that many illnesses can cause a rash and fever in children, including chickenpox, so kids who haven’t had a known exposure should be assessed by a doctor.

Know what to do in case of an exposure

Schools should follow the steps they normally would to avoid the spread of illness, the CDC says. If a school does have a case of monkeypox, staff should clean and disinfect the places the infected person spent time, as well as any items or surfaces they touched. Schools should wash any linens or towels the infected person used, and throw away any items that can’t be sanitized.

There’s no test for monkeypox right now, unless a person develops a rash after being exposed. Children and teens who are exposed should be monitored for symptoms for 21 days, the CDC advises.

During that period, parents and caregivers of kids who were exposed should take their temperature daily, check their skin for new rashes, and look in their mouth for any sores or ulcers. Schools should also be prepared to watch for symptoms so they can communicate with families. School officials should ask their local or state health departments for guidance on how best to do that.

In most cases, children and staff who were exposed to an infected person don’t have to be excluded from school. “It is important to avoid stigma and fear-based exclusion of children and adolescents,” the CDC says.

Generally, contact tracing will be possible, since the virus spreads through touch and schools will know which students and staff were in a particular classroom. But in cases where contact tracing isn’t possible and there was a high degree of exposure, a health department may limit a student’s participation in school or other activities.

“The health department will consider the age of the individual and their ability to recognize or communicate symptoms, the types of interactions in the environment, and the risk of more severe disease to others in the setting,” the CDC says.

Students or staff who develop symptoms while under monitoring should isolate at home.

Know how to handle symptoms at school

If a student shows signs of monkeypox at school, school staff should bring the student to a private space away from other kids, such as an office. If they’re at least 2 years old, the child should wear a well-fitting mask and a parent or caregiver should pick them up and have them checked by a doctor.

Staff who are monitoring the possibly infected student should avoid close contact, if possible, the CDC says, but still attend to the child in an age-appropriate way, such as changing their diapers or calming them down if they’re upset. The school staffer should wear a gown and gloves if close contact is needed, such as to hold the child.

If the child has a rash, staff should try not to touch it and cover it with clothing, if possible. The staffer should also wear a KN95 mask, or other well-fitting mask, and wash their hands. 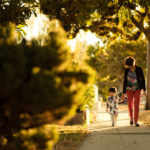 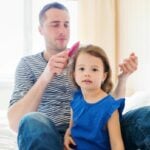