If you’re the parent of an only child, a new study shows you might not have to worry about your child’s temperament as much as you may have thought. Society has long-standing stereotypes of only children as self-centered and entitled, which leads many parents of solo kids to work hard to ensure their children don’t fall into the narcissism bucket. A new study, however, shows that only children aren’t any more likely to become narcissists than children with siblings.

A two-part study on the narcissism connection was conducted by researchers at the University of Leipzig and University of Münster in Germany. Titled “The End of a Stereotype: Only Children Are Not More Narcissistic Than People With Siblings,” the study was published in the Sage Journals this fall.

Personality depends on much more than birth order.

Results of the survey showed that only children were no more likely to exhibit these traits than those with siblings.

“We can now say with rather high confidence that only children are not substantially more narcissistic than people with siblings,” said psychologist Michael Dufner from the University of Leipzig in Germany.

Yet the stereotype persists.

Secondly, researchers gave an online survey to 556 individuals to assess their thoughts on only children. They had participants rate only children and children with siblings on the same self-admiration and narcissistic rivalry traits mentioned above.

So, what does lead to narcissistic personalities?

It seems these traits might be most strongly influenced by the classic factors of nature and nurture.

“As for most personality traits, genes are an important factor,” the scientists explain. Family studies indicate that genes account for at least 50 percent of narcissistic tendencies.

Parenting styles have a large influence as well. Highly critical parents or those with strict expectations of their kids can unwittingly foster narcissistic traits. “The basic assumption is that children internalize their parents’ praise and expectations and develop narcissistic features such as feelings of grandiosity and entitlement,” the university researchers explain.

These misconceptions can have negative consequences.

According to the study, “The gap between people’s stereotypes and objective assessments has important implications. Narcissism is considered a ‘dark’ (i.e., socially maladaptive) personality trait, and peers dislike individuals to whom they attribute narcissistic characteristics.” Those preconceived notions cause unfair discrimination against only children, considering the stereotypes are proven to be untrue. “Given this downside, researchers and journalists should refrain from portraying only children as narcissistic.” 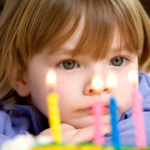 Your Child’s Birthday Can Impact Their Chances of Having Anxiety, Depression