New research found that one key to succeeding on math tests (and beyond) could be talking to yourself. Not out loud during test time, of course, but silently repeating a positive mantra can actually boost performance. But here’s the important part: the self-encouraging statements only worked when they were based on effort, not fixed qualities. So, instead of something like “I’m good at math,” the phrases that helped were more along the lines of “I will do my best.”

The study, published in Child Development, focused on 212 children ranging from 9 to 13 years old in the Netherlands. Some of the students were told to repeat effort-based positive phrases to themselves during the second half of a standardized math exam, and their performance actually improved during that half of the test. The most marked improvement was found in students who had initially felt less confident about their math skills. Those who used positive statements that only focused on innate abilities, however, did not show improvement.

“Parents and teachers are often advised to encourage children to repeat positive self-statements at stressful times, such as when they’re taking academic tests,” noted Sander Thomaes, who led the study. “But until now, we didn’t have a good idea of whether this helped children’s achievement. We discovered that children with low self-confidence can improve their performance through self-talk focused on effort, a self-regulation strategy that children can do by themselves every day.”

For parents looking for other ways to boost their child’s math skills, another study showed that a combination of finger counting/finger math practice (yes, using fingers is okay!) and symbolic number games led to significant improvements in math performance. The study, published in Frontiers in Education, tested out a variety of number-based games on 6- and 7-year-olds in a classroom setting.

Here are some of the research-tested games that can help boost math performance—and they’re more fun than you might expect! You can try them out at home with kids, or come up with your own variations. 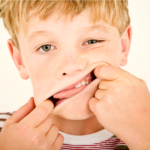 Coronavirus Update: Healthy Habits That Can Make a Difference, Even for Little Kids