What Is Inauguration Day? An Explainer for Kids

Given the 1.6.21 attack on the U.S. Capitol and the ongoing pandemic, the presidential inauguration on January 20th is going to look different this year than in the past.

But if you plan to watch the inauguration with kids, or talk about it, you’ll want to be ready with some explanations about the traditions, importance, and happenings of Inauguration Day. Here are some answers to key questions, and tips for talking about what’s different (and historic!) about this inauguration.

What is the inauguration?

The inauguration is a ceremony to kick off the beginning of the elected president’s four years of office.

If a president is reelected for a second term, there is another inauguration at the beginning of their second term. Inauguration Day has been a tradition since George Washington started his first term of office in 1789—more than 230 years ago!

When is the inauguration?

What exactly is the oath of office?

The oath of office is a promise that all U.S. presidents have to agree to live up to throughout their four-year term.

These are the words of the oath, as stated in the Constitution:

“I do solemnly swear (or affirm) that I will faithfully execute the Office of President of the United States, and will to the best of my ability, preserve, protect and defend the Constitution of the United States.” (Presidents often choose to add the optional phrase “so help me God” to the end of the oath.)

During the swearing-in ceremony, the Chief Justice, the highest-ranking judge on the U.S. Supreme Court (currently Chief Justice John Roberts), says the words of the oath out loud, and the president-elect repeats them. The elected vice president also has to swear in using a slightly different oath.

What’s the significance of Kamala Harris being sworn in?

This is a great opportunity to talk to kids about the significance of Kamala Harris becoming Vice President. Once sworn in, she will be the first woman, Black person and Indian-American ever to serve as Vice President. Ask your child why they think that’s important. Why do they think there haven’t been women or people of color elected to this position before? Why does it matter for kids to see people who look like them or who share the same cultural background doing great things?

What will be different this year?

There will obviously be fewer crowds this year, but many of the traditions are still happening, plus new ones are being introduced.

Inauguration Day usually involves a large luncheon, a parade, inauguration balls, and lots of tourists celebrating in Washington, D.C. There are often speeches and musical entertainment in front of a crowd of hundreds of thousands of people on the National Mall. But because of Covid-19 and security risks linked to the violent 1.6.21 attack by right-wing militants on the Capitol, the 2021 inauguration of president-elect Biden will look a lot different than usual. To start with, your kids might notice both sparse crowds, as well as the heavy security.

To cut down on the potential spread of Covid-19, there will be no inauguration balls or luncheons, and people are encouraged to stay home to watch. Instead of a huge crowd on the National Mall, this year only members of Congress and their families will be able to attend in person. To symbolize all the Americans who couldn’t attend, an art installation on the National Mall called the “Field of Flags” will include 191,500 flags and 56 pillars of light.

In response to continued threats of violence, security in Washington will be even tighter than usual. There will be a historically large police and military presence, including Capitol Police, Homeland Security agents, and National Guard. Muriel Bowser, D.C. Mayor, was granted a pre-disaster declaration from the federal government, which allows FEMA and other federal agencies to help keep the event secure. No members of the public will be allowed on the Capitol Grounds, and the Presidential Inaugural Committee (PIC) is strongly urging people not to travel to the event.

Instead of a large in-person parade that usually brings the new president to the White House, the Bidens will be escorted to the White House by a small group of representatives from each branch of the military. There will also be a “Virtual Parade” for viewers at home.

In addition, there will be plenty of musical performances throughout the day and evening to watch from home, plus a poetry reading by Amanda Gorman, the nation’s first Youth Poet Laureate.

The night before Inauguration Day, a lighting ceremony will honor the lives lost from Covid-19. Everyone around the country is invited to light up buildings and ring bells at 5:30 p.m. ET “in a national moment of unity and remembrance.” This should help set a serious tone for this inauguration, since it’s taking place in the midst of a pandemic and other national crises.

Is there anything else to know?

If your children have seen the news lately, especially if they’re older, they might recognize the US Capitol building and notice the stark contrast between what it looks like during the inauguration, compared to what it looked like during the violent riots that took place there less than two weeks earlier. Check in with them about how that makes them feel—the contrast could be unsettling, but might also make them feel optimistic about the country moving in a more secure direction. If you need help explaining what happened, we have a script that can help.

For kids who are interested in the details of the inauguration, you can share some more facts about past inaugurations from PBS NewsHour Extra. The Architect of the Capitol also has a video about how the inauguration is usually set up behind the scenes; plus, scroll down for a table of interesting notes about presidential inaugurations from George Washington’s up until now, to see how the traditions have changed over the centuries.

For answers to more logistical questions, as well as discussion points for families, also see Romper’s guide to watching the inauguration with kids. 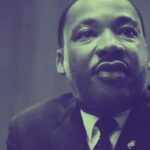 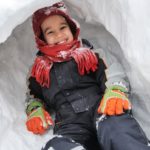