Like many children around the world, one 7-year-old boy from Texas decided to write a letter to Santa, letting him know about his holiday wishes. This was no ordinary kid asking for video games or a puppy, however. This boy’s letter was sent from SafeHaven, a Fort Worth shelter for victims of domestic violence.

The writer, whose name is omitted for the family’s safety, did ask for some modest gifts, including a compass and some chapter books, but it was his final request to Santa that has broken hearts across the country and pointed a spotlight at the tough situations so many domestic violence survivors must deal with around the holidays. The boy’s letter, which his mother found in his backpack and shared with shelter staff, asks Santa for a, “very very very good dad.”

Since his letter was posted to SafeHaven’s social media, holiday cards and gifts have been pouring into the shelter for the 7-year-old and the other children spending the holidays at the facility. Donations have also been rolling in to support SafeHaven’s vital work.

In the United States, about 1 in 3 women and 1 in 10 men have experienced domestic violence. That amounts to over 12 million people per year. The link between intimate partner violence and child abuse is indisputable. Forty percent of child abuse victims report that there was also domestic violence in their homes.

Only taking into consideration the domestic violence cases brought into the court system, 22 percent of the victims’ children witness the violence in their households. The actual number is probably higher considering the number of cases that go unreported.

The holidays in particular can be an especially difficult time for families struggling with domestic violence. The added financial stress, kids being out of school, and disruption of the usual routines and safety nets can cause increased anxiety for victims and their children this time of year.

The National Domestic Violence Hotline offers some suggestions for survivors and their allies during the holidays. Limiting the alcohol served at family functions if that tends to be a trigger for violence, making safety plans with trusted friends or family members, and knowing the location and phone number of the nearest domestic violence shelter are important measures that can help these families manage the challenges that arise during this time of year. 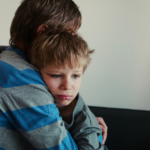 The Most Difficult Subject of All: What to Say to Your Child When Someone You Know Dies 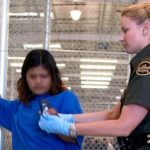