It’s long been said that parents have the hardest job in the world. They put in long hours, get little sleep and can’t call off for any reason, ever. Now studies are attempting to break the demands of parenting down into numbers, and the results are staggering. Believe it or not, parents burn over 50,000 calories a month doing their parental duties and should be paid over $178,000 a year for all they do.

Parenting burns as many calories monthly as 42,759 burpees

In a study done by Wren Kitchens, a family-owned kitchen design firm in the UK, the most common tasks parents do were broken down by the amount of time we spend doing them and how many calories they burn. At the top of the list of daily calorie burners was the parenting task of carrying children, done for approximately 108 minutes a day and burning 259 calories. This was closely followed by the general care of kids like dressing, bathing and changing them, which takes up 102 minutes a day and burns 245 calories. Time to thank your little shoe-thrower for the extra calories he’s helped you burn!

For tasks done weekly, cleaning chores like mopping, vacuuming, and sweeping took the top calorie-burning spots. Laundry also made the list, averaging 71 minutes per day, burning the equivalent of 169 burpees — though most parents would argue it seems like even more than that.

Making the bed was at the bottom of the list for calorie burning at just 20 calories, so don’t feel too guilty about leaving those covers askew.. Setting the table for dinner was close to the bottom as well, with 25 calories burned, so it’s a great chore to hand off to the kids!

All that effort should be paying off — literally

Salary.com apparently agreed that parents are a hard-working group, and set out to uncover how much we should be paid for all that labor. They do an annual salary calculation for moms (though the results are equally applicable to any stay-at-home parent), and their 2019 numbers are impressive…or would be impressive if parents actually got a paycheck for all their hard work.

According to Salary.com’s annual estimate of what a parents’ salary should be, parents in 2019 deserve a raise of more than $15,000 over the 2018 figure. “This year’s study gave consideration to traditional roles – like housekeeper, dietitian, and day care teacher – and newer roles – like network administrator, social media communications, and recreational therapist.” Parents in 2019 should be making $178,201 for job functions and skills ranging from academic advising to psychologist.

No matter how many calories we burn or how much money we should be making, parenting is as rewarding as it’s always been — it’s the only job with hours that never end but whose moments are nothing less than priceless. 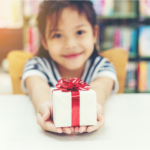