Tips For Helping Siblings Get Along in the Time of Coronavirus

If your kids aren’t sick of each other yet, chances are their irritation will flare up at some point while we all hunker down to get through this coronavirus pandemic. The constant bickering, poking, and overall blaming—“They started it!”—is driving some parents across the country batty already, but help is on the way! If nothing else, it feels good to know we’re not alone.

Experts say the first order of business is to accept that fights will happen. They’re all but inevitable when times are good, let alone when times are stressful. Being together all the time in the same space is bound to prompt conflict, so go into it expecting that and you’ll be less surprised and annoyed each time it happens, says Meghan Leahy, the parenting coach at the Washington Post. However, with a little planning you can avoid many sibling fights before they even start.

The idea is to get ahead of the conflict, rather than always react to it.

First, kids who feel connected to each other will naturally get along better. Some ways to encourage that feeling:

You can also try creating zones throughout your home and assign them to your kids when it looks like someone needs space. If you have a yard, a front porch, or a safe rooftop area, consider that when designating your zones, so they’re not all indoors at the same time (plus, fresh air can be a real mood-lifter). Some families have even started using a special word or phrase to signal to everyone else that they need some alone time. This might work even better if the phrase is silly, because just saying it out loud can help diffuse tension.

Another sanity saver? It can be hard to do right now, but try to establish some sense of a routine. It doesn’t need to be rigid, but setting up even a loose outline of the day’s activities helps ensure that everyone gets the time and space they need—and that everyone isn’t trying to use limited resources, like the family’s only computer or quiet space, at the same time. Make sure the kids have time apart throughout the day to minimize squabbles.

Even if you don’t already use a timer, set one out when they’re together if they’re prone to bickering, so they’re not as likely to overstay their welcome in each other’s company. When the timer goes off, everybody switches to a different activity—either on their own or with another person in the house.

The idea is to get ahead of the conflict, rather than always react to it. It’s easier to stay on someone’s good side—and vice versa—when you don’t push the limits of together time. As far as how long to set the time, it depends on the activity as well as your kids’ personalities (only you know how much of each other they can take before the hair-pulling begins).

Finally, make sure each child is still getting some one-on-one time with you, too. Kids sometimes turn on each other because they’re not getting enough attention from other sources. Parents are always busy, perhaps never more so than right now as so many struggle to juggle work and home in ways they’ve never had to before. But carving out a little time for a quick chat or snuggle can save you lots of time (and headaches) later.

When things do get heated, have a plan ready to cool everyone down.

According to research and the American Academy of Pediatrics, listening to music has a soothing effect on children, so try turning up the tunes when things start getting heated. One mom on Facebook told ParentsTogether about a local radio station that both of her kids love, so whenever they argue, she turns it way up and everybody suddenly starts to relax. It’s like a switch in the brain is activated, as if you changed the subject.

It also helps if you can designate a cooling-off spot for each child where they can escape when tempers flare. “For instance, can the 6-year-old retreat to a spot that is filled with some favorite things while you distract the 3-year-old?” Leahy says.

Another mom told us she asks her kids to write letters to each other. They don’t even need to exchange the letters afterward, just letting them release their emotions on paper is often enough for kids to feel better. Try having them rip up the letters and toss them out together as a show of solidarity, a way of saying they’re letting go of whatever caused the rift in the first place.

When all else fails, one mom told us she puts both her daughters inside a giant T-shirt, which instantly cues the giggles. Within five minutes, they’ve worked together to break out of the shirt and nobody can remember what they were arguing about in the first place. Hey, it’s worth a try, right?

If your kids continue to bicker, or a real issue comes up that needs to be addressed, experts suggest that parents try to act as mediators to help kids learn how to resolve the problem, rather than constantly trying to referee every debate. We have a 4-step plan for making mediation work for your family. 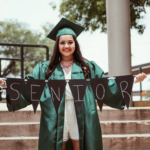 Kids and Parents Disagree About Who Will Cover College Costs 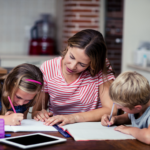 How Much Structure Does Your Family Need Right Now?