What to do if your child is lying

When kids lie, it can be upsetting and confusing to parents. But before you jump to conclusions about your child being malicious or manipulative, consider some of the (very natural!) reasons your child might not be telling the truth.

Honesty is a skill that can take a lot of practice, so we’re sharing ways that you can support your child in finding alternatives to lying. You’re in this together!

Of course if you’ve tried all of these approaches and you’re still concerned about the frequency and severity of your child’s lies, don’t hesitate to talk to a pediatrician about whether your child/family could benefit from professional support.

First, determine what kind of lies they’re telling and why

When kids are inflating what actually happened or saying things that are obviously untrue just to get a reaction, the best thing to do is to gently remind them how much you value honesty. Rather than teaching them a lesson about telling the truth, punishing young kids for lying is shown to just encourage them to become better at lying so they can avoid being disciplined.

If they seem to need a self-esteem boost or are crying out for attention, think of other ways to build them up, like offering specific praise and encouragement at other times, giving them an important role in family activities, and scheduling more one-on-one time.

Young kids with active imaginations naturally blur the lines between reality and fantasy, so you’ll want to encourage their creativity as well as teach them how to be honest. You can say:

When kids frequently say untrue things but aren’t necessarily doing it with intention, that’s a sign that they may need to work on being more thoughtful before speaking. This type of impulsivity can be common among kids with ADHD who simply forget to check the truth before quickly answering, or kids who don’t like being under pressure and want to get you off their back by giving the easiest answer.

Kids need to practice the skill of answering more thoughtfully and honestly, so you can say:

First, if you suspect your child might be about to lie, try to interject with a reminder about the value of honesty. “I won’t be upset if you [fill in the blank], as long as you’re honest. It makes me so happy to hear you tell the truth.”

If a child does knowingly lie to avoid taking responsibility for their actions, it’s important that they understand the merit of repairing any harm that might have occurred because of the lie. Review the elements of a sincere apology if their actions affected others, to help them learn that an apology is much more than simply saying “I’m sorry.”

But don’t make them feel like a bad person for telling the lie. Never refer to them as “liars” or generalize that they “always lie,” which can stick in their minds and become part of the way they define themselves. That’s NOT what we want! And avoid harsh punishments, as they’ll simply teach kids to be sneakier or become better liars. Instead, find ways to encourage honesty and connection: 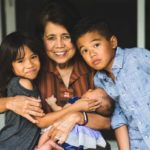 Tips For Making Things Easier When Grandparents Help With Childcare