“Time’s Up!” Parents Share Their Secrets For Avoiding Meltdowns When Screen Time Is Over

As screen time ramps up while everyone’s at home during quarantine, parents are reporting that kids are increasingly resistant (read: throwing tantrums or displaying other difficult behaviors) when it’s time to turn off their screens. And while this has always been a controversial topic, suddenly even the experts say we should be cutting kids some slack. Case in point: The American Academy of Pediatrics recently relaxed its screen time guidelines in light of the Covid-19 pandemic. That said, nobody wants to see kids glued to screens all day long.

The problem, parents say, is that asking a kid to turn off tech when they’re in the middle of a game, movie, or TV show can be like setting off a bomb of ear-piercing screams and bubbling emotions. Kids, especially younger ones who haven’t yet figured out how to regulate their emotions, can get very upset when a parent decides it’s time to shut down tech (or anything fun they’re doing, to be honest). And many parents report that the longer their kids’ eyes are glued to screens the worse their behavior is in general, regardless of whether a particularly engaging activity is being interrupted. If you’re way too familiar with the tantrums, screams, tears, and general crankiness that ensues when you try to switch off screens at your home, you’re not alone.

But before we dive into how to avoid these meltdowns altogether, it’s a good idea to do a quick primer on the best practices regarding screen time and kids, according to experts. The AAP’s new guidelines underscore how important it is that parents remain vigilant about what kids are watching, playing, and who they’re interacting with online. It’s also important to model healthy habits—in other words, if you tend to reach for your phone, iPad, or laptop often, chances are your kids will, too, so try to curb your own screen time if you can.

Another important thing parents can do? Make sure you set aside time for other types of play, including outdoor play and family time, which will make it necessary to set limits on screen time (there are only so many hours in the day, after all).

Understanding why your child feels the way they do when it’s time to shut things down is also key. When a child—or anyone—engages in an activity they like, such as watching a show or playing a game, the brain releases a feel-good hormone called dopamine. When screen time comes to an end, those dopamine levels take a major hit. Adults have the reasoning skills and the mental capacity to override the switch, but little kids don’t. In short, it’s hard for a small human to understand why they should stop doing something that feels great, hence why screen time often turns to scream time.

It is possible to smooth the transition, however. Here are a few ways that other parents have learned to deal with meltdowns related to screen limits. Hopefully, these will help you avoid a tantrum the next time you have to be the bearer of bad news that screen time is over.

Set a timer. Tons of parents told us on Facebook that having a timer helps to manage their kids’ reactions to screen limits, but it depends on how you use it. Try having your child set the timer instead of you, and discuss beforehand how much time they’ll get and perhaps even how they’re allowed to spend it. For example, if you let them have 60 minutes of screen time per day, letting them decide how they want to break that up makes them feel more in control of their screen time, which may help to minimize disappointment later.

Trade up. This works best on younger kids who often have a favorite toy, game, or lovey they like to play with just as much as they love to watch a favorite show. Try presenting them with it as a way to transition them away from screens and onto something else. After all, if you have to give up something you love, it’s not so bad if you’re trading up to something else you love equally as much—or perhaps even more so.

Have a plan on deck. Like having a toy at the ready, try approaching your child about the end of screen time armed with another activity that’s ready to go. Maybe there’s a tea party set up in the next room or perhaps it’s time to blow some bubbles or play a board game with Grandma. Whatever it is, having something that they can immediately focus their attention on often helps to manage the meltdowns or avoid them altogether.

Ditch the warnings. Sometimes knowing what not to do is as important as knowing what you should do. Lots of parents give kids warnings when their tech time is coming to an end, thinking that the heads up will smooth the transition. But several research studies have shown that these can really backfire. One such study from the University of Washington interviewed dozens of families about how they manage screen time for their toddlers and preschoolers. The researchers concluded that instead of helping to ease a child’s transition away from screens, a two-minute warning prepared the kids to fight it, all but guaranteeing a major meltdown. Whenever possible, discuss the limits on screen time ahead of time and avoid any countdowns.

Make a schedule and share it with your kiddos. One mom told us schedules are a lifesaver, and according to experts, she may be right. Routines give kids a sense of security and stability, so they’re not caught off guard when it’s time to switch from one activity to another. It actually provides them the freedom to explore the world without worry, because they know what’s coming next, Victoria Manion Fleming, Ph.D., a child and family therapist in Northbrook, Illinois, recently told Parents magazine. Set a time for screens, outdoor play, reading, schoolwork, meals and snacks, and even bathtime if you like. Just make sure you share it with your kids ahead of time so they know what they can expect. It’s also a good idea to hang your schedule in a central location as a constant reminder that the day is split into multiple activities, rather than a single one.

Lean into it. Sometimes you just can’t avoid a meltdown no matter what you do. After all, we all have bad days when our emotions get the better of us, kids included. When that happens, try being there for them instead of fighting with them. Give your little one a hug, sit with them, and ask your child to tell you how they feel. Validating their feelings rather than fighting them can provide a breakthrough for lots of families because it communicates to your child that you empathize with their disappointment and their feelings overall. Tech addiction is a real thing that is likely to become a lifelong struggle for many people, so leaning into it instead of rebelling against it constantly may help everyone learn to manage it better.

Build a bridge back to reality. Many experts suggest stepping into their virtual world for a few minutes rather than asking them to abruptly step into your real world. Start by asking what they’re watching or playing. Join in for a minute or two or ask them questions about it—kids love to share their love of things and in many cases, they’ll perk right up at the chance to tell you about their favorite game. Feign interest and share in their excitement, then ask them to keep telling you about it while you shut it off and move on to something else. Accompanying them on their transition from the virtual world to the real world can be a real gamechanger, according to clinical psychologist  Isabelle Filliozat, whose three-step plan was covered recently in Mother.ly. When in doubt, enter your child’s world, ask questions, and together, cross the bridge back to reality—together.

Whatever you do, keep in mind that meltdowns are normal, especially when kids are little and unable to reason much. Just be consistent with your choice for how to handle these moments and stick with it, and chances are much higher that you’ll be successful—and the piercing screams will stop. 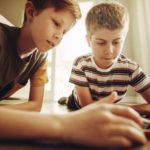 Experts Share Guidance on Screen Time for Babies and Toddlers