Can Roblox be dangerous for kids? Here’s what parents need to know

Roblox is considered the most popular video game for 5- to 12-year-olds. That’s not surprising: There are no-cost options for play, it works on practically any device, and the platform makes it easy to invite friends to play with you. And because Roblox is actually a platform in which to explore more than 40 million creative games and virtual worlds, it offers plenty of variety to keep kids interested, and even the opportunity to create their own games.

Roblox is designed for young kids, so parents might assume it’s a safe platform. However, Roblox is still an online platform with monetary transactions, advertisements, and the ability to connect to other players and their content — meaning that there are plenty of safety considerations for families.

Here’s what parents need to be aware of when their kids want to play Roblox:

While the cartoon-like games on the platform are primarily meant for kids, there’s no age cap for players or developers. Kids playing the online version could be interacting with adults via chat — including in-game voice chat for users 13 and up — as well as exploring virtual worlds with questionable content.

Just like the rest of the internet, playing Roblox comes with the very real risk of encountering predators, adult content, bullying, racism, hate speech, and all kinds of extremism. Most parents aren’t aware of the kind of content that exists in Roblox that is not kid-friendly, including fake strip clubs, concentration camps, racist games like one which “encourages Roblox players to hunt and kill African people,” and more. It’s important to remember that while Roblox might be considered a “kids’ game,” everything your child encounters there was created by other users.

It’s also critical to remember that those users — and fellow players a child might meet online — are not always kids themselves, and don’t necessarily have kids’ best interests at heart. For example, one mom publicly tweeted a thread containing screenshots of Roblox users’ profiles she’d found recruiting kids into extremist hate groups like the KKK and other white supremacist groups, fundraising for neo-Nazis, and celebrating serial killers. Parents have also reported their kids encountering predators within the game, like one child who’d secretly been contacted on a third-party messaging app by someone he met on Roblox and was “groomed into sending sexually explicit images of himself,” and the six-year-old girl invited into a “sex room” by a “friend” while playing Roblox.

Although Roblox does restrict certain content and features for users under 13, their system for moderation and harassment prevention does not have a strong reputation.

The wide online world(s) of Roblox

Playing offline is the absolute safest way to play Roblox, especially for the youngest kids. But as kids get more into the game or want to interact with friends while playing, you may decide to let them play online.

If you do switch to online play, be sure to check privacy settings carefully and restrict access to friends that they actually know and trust in person. Help them check their Roblox friend requests one by one and confirm each person’s username with that friend or the friend’s parent before accepting them. This will give them a good foundation for how to use other social platforms wisely in the future.

When kids get older, you might choose to let them open up Roblox play beyond their friend list. If you do, be sure to remind kids to never share any personal information with others online — and this includes leaving out any visual hints about what school they go to or where they live when designing their own Roblox area. Also review these other tips for keeping kids safe online.

Parents need to know that just because the platform is available at no cost to join, download, and play, doesn’t mean it’s always free. There are plenty of enticing ways for kids to (intentionally or unintentionally) spend money in order to enhance their Roblox avatars and experience.

Some of the in-app purchases are wildly expensive, and there can be pressure to spend more, and even to gamble, to acquire the accessories you want. Many parents have reported that kids spent hundreds or even thousands of dollars while using Roblox — and parents didn’t find out until they saw their bank statements.

Be aware that Roblox uses a fake-seeming currency called “Robux” — so some kids may be confused about whether they are actually spending money or not when they make transactions on the platform.

All parents of Roblox-playing kids should immediately check the device and app settings to turn off any automatic in-app purchases. Require a password for all purchases, and discuss rules and expectations with your child about using Robux and any other types of payment systems on the devices and apps they use. You can use it as a way to reinforce lessons about financial literacy.

Another controversy surrounding Roblox is that the people who create the many virtual worlds and games within the platform — most of whom are minors — may not be receiving fair compensation, considering how much profit they bring to the company. Developers (who must be 13 or older) can only earn a small percentage of a game’s earnings, and the system for converting Robux earnings into real-world money is confusing and discouraging.

While becoming a creator on Roblox can be fun and educational, be sure that your kids aren’t duped into thinking they can easily make money through the platform. Read through the developer rules and procedures together to help them understand what they are getting into, and what their options are.

The platform recently removed advertisements and sponsored content for Roblox users under age 13. This change does reduce some of the risks of younger children being targeted or exploited on the app.

But this also means that ads and sponsored content can be targeted specifically toward teen users, and any vulnerabilities that teens may have. So it’s important for parents to have frequent conversations with teens — and kids of any age — about media literacy and recognizing marketing tricks.

Want to make Roblox as safe as possible for your kids? Check out Common Sense Media’s Parents’ Ultimate Guide to Roblox for instructions on setting up parental controls and more useful tips. 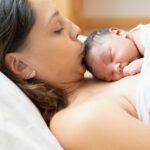 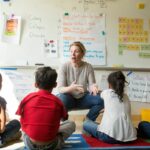 Photo by Allison Shelley/The Verbatim Agency for EDUimages
Next Post

Flu, RSV and COVID are wreaking havoc — but teachers don’t feel like they can stay home when they’re sick