Loaded Question: The One Thing Parents Should Ask Before a Playdate or Sleepover—But Don’t

Every parent wants their child to be safe, but too many of us feel uncomfortable bringing up the subject of firearms when our kids go on playdates and sleepovers.

Perhaps these recent study results will change that: A survey of 3,000 gun owners revealed a whopping 40 percent do not lock their guns, even when they have children in the home. Responsible gun ownership means securing weapons in a safe location when not in use, but too many people aren’t taking that seriously—despite the fact that firearm deaths in U.S. schoolchildren are growing at such a disturbing rate that experts have recently called it a “major and clinical health crisis.”

Conducted by researchers at the University of Washington School of Public Health, the study consisted of a one-page survey handed out to gun owners attending gun safety events at sporting goods stores in 10 different cities over a three-year period. In addition to those who said they don’t keep their weapon safely secured at home, another 39 percent of gun owners said they always have at least one gun loaded and 14 percent said they store their weapons unlocked and loaded at home.

Lead researcher on the University of Washington study, Aisha King, attributes this in part to misinformation. Many parents of young children believe their kids don’t know where the guns are located, or how to access them. “A lot of times, the kids do know,” King reported in a statement. “Also, guardians might think that training adolescents or older children is enough to keep them safe, that training means they don’t have to lock their guns. Unfortunately, a lot of adolescents are at high risk of suicide, and unlocked guns add to that risk – regardless of training.”

Previous research found the primary factor contributing to mass shootings and smaller gun violence incidents is access to guns, and safely locking unloaded firearms greatly reduces the risk of injury. The American Academy of Pediatrics (AAP) also recommends that guns be stored and secured unloaded—if you have them in a home with children at all.

Tips for discussing firearms in the home

In a world where parents feel increasingly comfortable talking about everything from  breastfeeding to spanking, why are so many of us still reluctant to ask if there are firearms in the home of a child’s playmate? Statistics aren’t available on how many parents do or don’t ask about firearms prior to kids’ social engagements, but it’s uncommon—and important—enough that the AAP and the Brady Center to Prevent Gun Violence joined together to create the ASK (Asking Saves Kids) Campaign to encourage parents to ask about the presence of guns where their children play.

Sometimes the best way to address a difficult subject is to acknowledge the awkwardness head on—and to remind yourself that the vast majority of parents will be completely fine with you asking. The next time your child goes to a friend’s house and you’re wondering about firearms, try one of these conversation starters suggested by PAX, a nonprofit organization dedicated to ending gun violence, which has since merged with the Brady Campaign.

Considering that firearm injuries kill 2,500 American children each year and send another 12,000 to the emergency room, no parent should ever be offended just because you ask a question about firearms—and no parent should ever feel stressed about asking. The next time you’re tempted to stay quiet instead of openly talking about gun safety with another parent—or anyone, for that matter—consider that the life you save may be your child’s. Don’t forget that having regular, age-appropriate conversations with your child about gun safety, especially the importance of staying away from firearms if they ever come across one, can also help to greatly reduce the risk of injury.

Finally, remember that if you’re uncomfortable for any reason, you can always move a play date to another location (like the park) or decide to host the sleepover or playdate yourself instead. 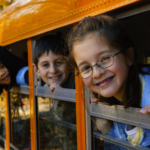 In the Face of a Climate Emergency, School Districts Are Starting to Go Green

All of Spokane, WA was virtually shut down after the Spanish influenza arrived with a vengeance, the Spokane Daily Chronicle reported on Oct. 9, 1918. All schools, theaters, churches, and social clubs were closed. The mining stock exchange and YMCA were shut down. Spokesman-Review archives
Next Post

From Spanish Flu To H1N1: Why Schools Close During Epidemics Like The Coronavirus