Whether your kids identify as LGBTQ or not—and whether they have family, friends, or classmates who do, or if they’ve never met anyone who’s openly LGBTQ—it’s important for them to hear about queer and trans people both in a positive light and in a variety of roles. The more we listen to people different from us, the more we can help build an inclusive and equal world for all. And the more LGBTQ kids see people like themselves represented in the world, the more confidence they can develop to become who they want to become.

The following diverse LGBTQ contemporary heroes who are rocking the realms of sports, the arts, and politics are likely to inspire your kids—and you!—plus lead to some interesting discussions that they might not be getting in school or in their social circles. See below for kid-friendly ways to introduce each person and their accomplishments.

Fast facts: Schuyler Bailar is the first openly transgender athlete to be on a Division I college swim team. He is also the first trans athlete to compete in any sport on a Division I men’s team, and the only one to have competed for all four years. He was initially recruited to the Harvard women’s swim team, but decided to join the men’s team instead after his transition—even though he knew his ranking as a competitive swimmer would suffer. After graduating from Harvard in 2019 with a degree in psychology, he is now a public speaker, activist, and researcher. He also has a middle grade novel coming out in 2021!

Start the conversation: Watch this short Identify documentary episode on the Olympic channel for more about Bailar’s beginnings as a water baby, the hard decisions he’s had to make as a transgender athlete, and his heartwarming relationship with his grandmother. Or start by browsing his very informative Instagram account together, and you’re both bound to learn something and have plenty to discuss.

Fast facts: Sharice Davids is a U.S. Representative whose election in 2018 marked many firsts: the first openly gay Native American in Congress, the first openly gay person in Congress from Kansas, and one of the first two Native American women in Congress. A member of the Ho-Chunk Nation who was raised by a single mom, she became the first in her family to go to college and ended up with a law degree from Cornell. She also competed as a professional mixed martial artist (MMA) and worked in community and economic development on a reservation before deciding to run for office. In a traditionally conversative state like Kansas, her representation for the LGBTQ and Indigenous communities and her commitment to equality make a bold statement.

Start the conversation: Watch this three-minute NBC Out video that documents Davids’ upbringing, her unlikely path to Congress, and what drives her to fight for equality. There may be plenty to relate to for your kids and/or plenty of differences between her background and theirs—but either way, it makes for interesting discussions about who represents us in government, plus what careers your kids may want to pursue.

Fast facts: A versatile artist, writer, and musician, Vivek Shraya has released 15 musical albums, published 7 books, and started a publishing imprint to highlight the works of diverse authors. Many of her storytelling touches on being trans, queer, and South Asian. She came out as trans in 2016 using her original song, “Girl It’s Your Time,” to announce her switch to she/her pronouns.

Start the conversation: With younger kids, check out Shraya’s picture book The Boy & the Bindi for a unique take on gender expression, Hindu culture, and a sweet mother-child relationship. With older kids, start with her illustrated book of short stories told from a child’s perspective, God Loves Hair; or her memorable interview in the second half of this Nancy podcast episode.

Fast facts: Pidgeon Pagonis is a queer, non-binary, and intersex activist who was diagnosed with androgen insensitivity syndrome (AIS) as a child and was forced to undergo unnecessary surgeries to alter their genitalia because they had characteristics of both male and female bodies. Pagonis worked with interACT and co-founded the Intersex Justice Project, part of the movement which recently succeeded in getting a major children’s hospital to apologize for and promise to end non-consensual, medically unnecessary procedures on intersex infants.

Start the conversation: For a quick introduction to what intersex means, featuring Pagonis and a few other intersex activists, watch this As/Is video, What It’s Like to Be Intersex. For more specifics about Pagonis’s life and experiences, watch their YouTube channel which has fun and open episodes about everything from appearing on the cover of National Geographic to surgeries they had as a child.

Fast facts: Alice Wu is a film screenwriter and director whose films have broken barriers of representation for Asian Americans and queer women. When she started out, she turned one of her amateur stories into a movie script, quit her tech job, and decided to learn film editing. When it came time to create the film, Wu wouldn’t let any studios buy the script without letting her direct it and make decisions herself, because many Hollywood executives wanted to whitewash the Taiwanese American main characters. She stayed true to her story, and ended up making Saving Face, which in 2004 was the first Hollywood film starring a mostly Chinese American cast since 1993—not to mention a lesbian love story.

Start the conversation: Tweens and teens can watch Wu’s recent queer high-school romantic comedy The Half of It, and teens may also enjoy the groundbreaking 2004 rom-com Saving Face. Both films have plenty of family dynamics and coming-out moments to discuss. Plus, watch the brief Queerty interview where Wu discusses the special thing about high school, small towns, and other conversation fodder for your family. 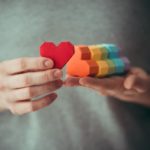