Pride Glossary: A Guide to LGBTQ+ Identities for Families

The LGBTQ+ community is huge and diverse! In addition to folks who identify as lesbian, gay, bisexual, trans, and queer, Pride also celebrates people with other identities like asexual, nonbinary, pansexual, and intersex.

The acronym used to describe the queer and trans community has evolved through the decades as more people feel comfortable expressing the diversity of their identities. Its first iteration, LGB—for lesbian, gay, and bisexual—was used as early as the 1980s.

Nowadays, the most commonly used versions of the acronym are LGBT or LGBTQ—with the addition of T for ‘transgender’ and Q for ‘queer’ or ‘questioning.’ Some folks prefer to use longer versions to be inclusive of additional queer and trans identities, such as LGBTQIA2S+.

The LGBTQ+ community as a whole includes anyone who doesn’t identify as heterosexual (only attracted to opposite gender romantic partners) and/or cisgender (a person who identifies with their birth sex). The growing diversity is wonderful, yet at the same time can be confusing to those unfamiliar with the expanded terms and definitions. Some people might be hesitant to use any of these words at all out of concern they’ll use them incorrectly, or possibly even offend someone, but getting comfortable with the terminology is a critical step toward inclusion of these groups!

There’s no need to worry—here’s a quick guide to some of the identities within the community to help. You can also use the images in our Instagram carousel below to help with specific language that’s easier for kids to understand:

Gay: Someone who identifies as a man or masculine person, who is only attracted to other men or masculine people. This term is also used in a gender-neutral way to describe folks who only experience same-gender attraction.

Queer: An umbrella term which simply means ‘not heterosexual’. Folks may use this term because other identities feel too limiting, or simply as a means of identifying with the community at large.

Intersex: Someone with reproductive or sexual anatomy that doesn’t fit the typical definitions of “male” or “female”. Nearly 2% of the population fits into this category—roughly the same number as people born with red hair!

Asexual: An umbrella term that covers a spectrum of levels of sexual and romantic attraction. Someone on the asexual, or “ace,” spectrum might not have any interest in sexual activity, but may still desire a romantic partnership.

Two-Spirit: A term used by some Indigenous people who identify as having both a masculine and a feminine spirit. Two-Spirit folks have often fulfilled important traditional roles within indigenous cultures.

Pansexual: Someone who has the potential to be attracted to others regardless of their gender. When someone holds an identity that doesn’t fit into the monosexual (attraction to one gender only) norm, the term(s) they identify with closest—whether pansexual, bisexual, queer, or something else—is often a matter of personal preference.

Nonbinary: Someone who neither identifies as a man or a woman. Other terms used to describe folks outside the gender binary include agender and genderqueer.

Keep in mind that each of these terms represents a diverse group in and of itself—and that there are even more queer and trans identities that exist within this vibrant and evolving community! 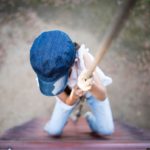 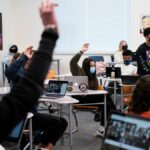 A classroom conversation in Denver, Colorado in April 2021. | Eli Imadali for Chalkbeat
Next Post

Efforts to restrict teaching about racism and bias have multiplied across the U.S.