Forgoing the flu shot may not seem like a big deal, but if you’re pregnant or nursing, you may want to rethink that.

The Centers for Disease Control and Prevention (CDC) recently released a report warning that too many pregnant and nursing moms are opting out of both the flu and tetanus, diphtheria and pertussis vaccine (the latter is known collectively as the DTaP vaccine, or whooping cough). This puts both them and their babies at risk for infection and hospitalization, as many babies lack the natural antibodies needed to defend themselves.

The CDC recommends that all pregnant women get a flu vaccine during any trimester of each pregnancy and the whooping cough vaccine during the early part of the third trimester of each pregnancy. In a CDC survey of more than 2,000 pregnant women, three quarters said their healthcare providers offered or referred them for vaccination, but only 35 percent actually received treatment.

Once babies are born, experts say they should get the whooping cough vaccine, too. Unlike other one-time shots, the whooping cough vaccine is administered in three doses at 2, 4, and 6 months of age, followed by two booster shots— one between 15 and 16 months and the other between 4 and 6 years old. That’s a lot of shots and doctor’s visits, which may be what prompts parents to opt against it. As a result, only about 80 percent of children under 3 receive all four doses. Whooping cough can lead to persistent coughing for weeks and leave some babies gasping for breath.

Vaccines are proven to keep babies and mothers healthy.

Even though both vaccines have been deemed safe, many women say they don’t get them because they’re worried they may inadvertently prove harmful to their newborn babies. While it’s true that children and adults who get the whooping cough vaccine can still become infected, the disease is much less serious and less likely to require hospitalization in those who are vaccinated.

A  2018 study showed that getting a flu shot reduced a pregnant woman’s risk of being hospitalized with flu by an average of 40 percent. Pregnant women who get the flu vaccine are also helping to protect their babies from illness for the first several months after their birth, when they are too young to get vaccinated.

The CDC is asking doctors and midwives to communicate these facts to parents and encourage vaccination. Parents in turn are encouraged to talk to their healthcare provider or pediatrician if they still have concerns. 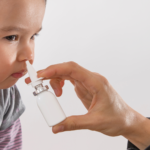 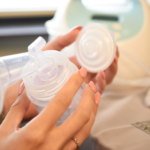